BLOG POSTS WHERE USERNAME IS ORANGESOX

We are excited to unveil a new home for the Narration Chart!

First completed on the Silver Anniversary of the Crest Theater Gamehendge show, the chart now features 182 transcriptions of every available Gamehendge narration from April Fool’s Day, 1986, through the most recent “Harpua” from the 2021 Halloween run.

The project began in 2017 as a spreadsheet with links to the setlists, audio from phish.in, and all new transcriptions created by a team of volunteers from the phish.net forum. Its new placement within the site’s database will ease access and maintenance and hopefully increase exposure to this unique aspect of Phish’s performances.

In addition to the five “complete” performances (and one partial version) of the Gamehendge saga originally introduced in Trey’s thesis for Goddard College, The Man Who Stepped into Yesterday, the chart also includes a wide variety of performances from the two narrative heavyweights, “Fly Famous Mockingbird” (75 entries) and “Harpua” (57 versions), 23 different pleas to read the f***ing book, 12 “Rhombus Narrations” that served as an introduction to “Divided Sky” for several years during the first decade of the band, along with rare narrations accompanying songs like “Esther,” “Tela,” “The Lizards,” “The Sloth,” “Llama,” “Punch You in the Eye,” not to mention one very special “Wormtown.”

Volunteers will continue to keep the chart updated as new performances occur and new recordings appear (like last year’s 3/8/93 release!). Of course, please send along a note if you find any kind of narration (but banter ≠ narration) hiding in the recesses of old shows or if an egregious error requires an edit.

JAM OF THE ERA

Following the completion of the 2019 edition of the annual Jam of the Year (JOTY) tournament, forum regular @Ry_storm proposed a larger-scale Jam of the Era tournament for all of 3.0 (so far) to keep everyone listening while many of us are stuck at home or otherwise out of our regular routines.

Seeding was done through an open call to forum users to rank up to 64 unique versions of songs since 2009. 238 different selections were made through dozens of submissions. 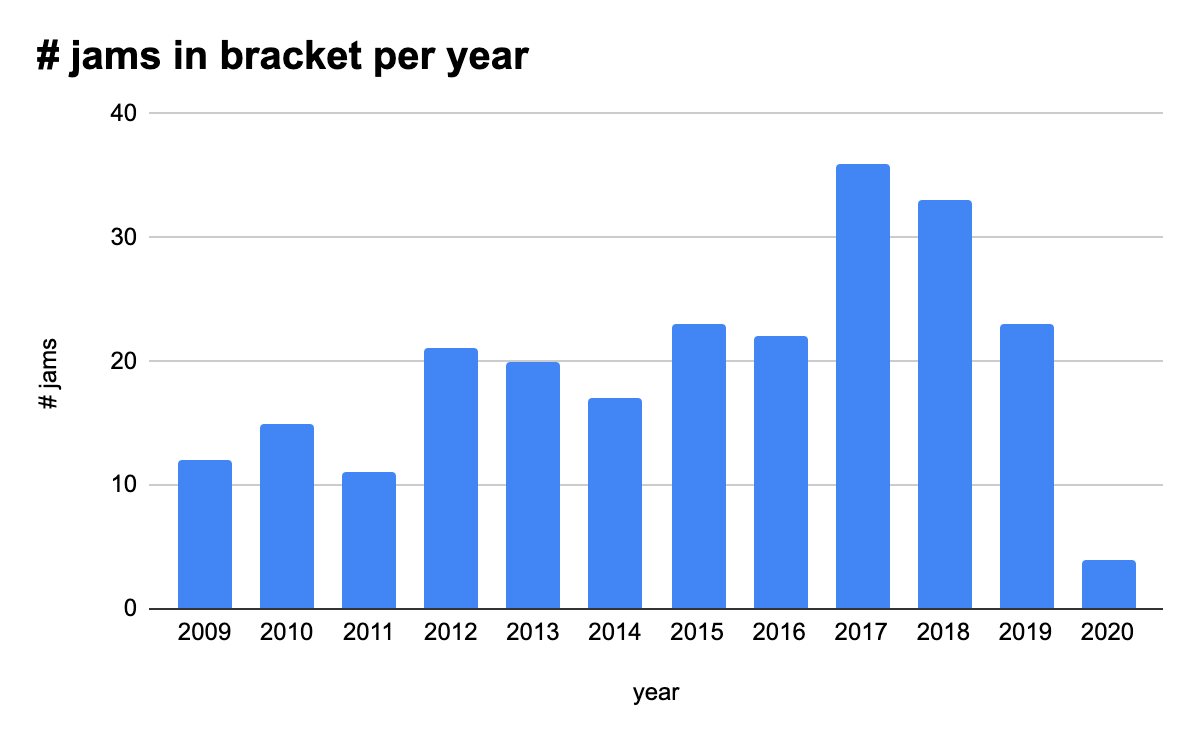 HAMPTON N2: FROM FLUFF TO FLUFF

Only one other large indoor venue stacks up against the Hampton Coliseum in terms of relevance to the band’s history through the years. From their first stop there in 1995, Phish has crafted an awesome reputation for greatness within the round room off the Hampton Roads. It was no fluke that the band chose the space for their return in 2009, and from the moment it was announced, this run has been seen as an important destination event for many fans, the third straight three night stand coming five years after their last visit.

Actually, while we’re using numbers... on the second night of their tenth year at The Mothership (the endearing nickname fans have given Hampton Coliseum, due to its resemblance of the spaceship from "Close Encounters of the Third Kind"), Phish performed their twentieth concert in the hallowed space. The numerological unlikelihood that this would be also be the 20th day of the 10th month of this year is surely just insignificant and coincidental. However, we Phish fans are certainly a very superstitious lot.

The Silver Anniversary of arguably the purest live performance of Trey's Gamehendge saga, The Man Who Stepped Into Yesterday, offers us the ideal occasion to unveil this new project. And, we have to admit, the rigid deadline definitely helped expedite the process.

Legend has it that, much like the song cycle’s subsequent performance at what has come to be called the “GameHoist” show, the venue was under-sold. The crowd clearly gave the band its patient, undivided attention. Whatever prompted the band to finally immerse their live audience in the full story in Sacramento 25 years ago today, the tape of the show became a rite of passage for nearly every fan, thanks to the widely shared and very crispy SBD.

Born inside a .net forum thread, a group of regular contributors committed to what seemed to us a worthwhile endeavor to compile transcriptions and summaries of every narration available on audio recordings. The thread began shortly after the release of St. Louis '93, prompted by my listening to the powerful “Harpua” from the April date. As soon as the thread got legs, I knew I would have to put my money where my mouth is.

[This recap of last night's tour-opener is courtesy of Chris Cagle, user @OrangeSox. Thank you Chris!]

Many have remarked that Phish has begun to tilt their “tours” toward “destinations” built around holidays, major cities, and tourist enclaves, but when The Baker’s Dozen was announced, the tilt became a topple. Three night stands in Mexico, Chicago, and Denver, along with the thirteen in New York, account for 22 of the year’s currently announced 24 shows. Just two stops on the route from Chicago--in Dayton and Pittsburgh--to New York give the Summer any real appearance of an actual tour, as many fans envision one.

For a few “jaded vets,” the bravado novelty of a 13 show residency in the nation’s most established performance space could not overcome the failure to more fully reach the band’s broad audience coast to coast. The announcement of five shows across the Midwest leading to New York did little to quell the rancor; the shows were even dubbed by some to be “warm-up” shows.

Many more marveled that the band would be so bold as to take over Madison Square Garden for three weeks, and the additional shows beforehand gave a lot of people the chance to catch a show this Summer when there were no shows before. That the four need a little warm-up should come as no surprise, and it's undeniable that The Baker’s Dozen deserves the extra effort. Their first show of the Summer proved again that even while the band adjusts to being back onstage together in front of thousands, moments of glory abound, giving solid reason to believe the next week will warm up indeed.

A week ago, while Phish premiered “Petrichor” before the audience in Charleston, one of .net's finest, @ucpete, performed his first marriage ceremony, betrothing @telaree and me, having graciously answered a call made here in the .net forum for an officiant of a wedding in a redwood fairy ring in Marin County, California. In his wonderful presentation to our families, he necessarily mentioned the band and of course .net, reflecting the important role they've played in our union. After all, it was a jaunt to Deer Creek in 2012 that solidified our relationship, since maintained by a half dozen subsequent trips to see the band together, including the soggy, underrated run here in 2013. So it was only natural that we would make a return trip to Alpharetta and call it our honeymoon.