LANDING WITH A TWIST

[We'd like to thank @paulj for once again contributing a thought-provoking analysis piece to the blog - ed.]

Since its introduction in June of 1997, "Twist" has been a welcome addition to the Phish catalogue. With just a couple of exceptions during its early years, "Twist" has never been out of regular rotation, averaging an appearance about every five shows.

With only 10% of its appearances in the first set, "Twist" has fulfilled a variety of roles in the second set. First, "Twist" made its debut as a second set opener and, in its 145 total appearances, has been a set opener 15 times.

Second, although "Twist" does not generally enjoy the big jam reputation of its contemporaries such as "Piper" and "Ghost," it has a top ten ranking in total number of Jam Chart entries during the 3.0 era. "Twist"’s 23 Jam Chart entries for 3.0 were, I’ll happily admit, a bit of a surprise as I’d always pigeon-holed the song into its third role: maintaining the second set groove.

But in recent years "Twist" seems to have developed a yet another role: as a preferred landing spot following huge jams. A meme posted to Phish.net by @Pagegrrl34 captures this perfectly: 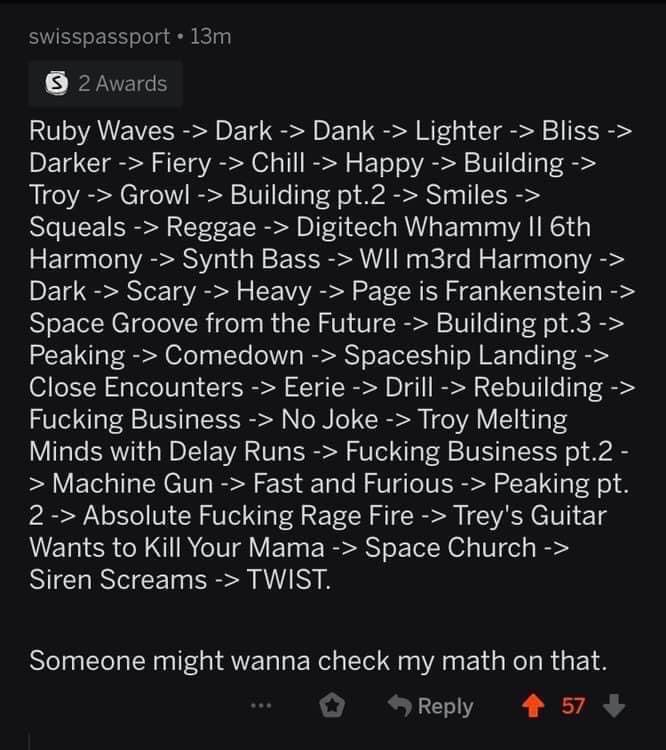 So, what is the connection between "Twist" and songs that have had big jams?

We can use the ‘Every Time Played’ (ETP) list and ‘Jam Charts’ posted at Phish.net to tease out the relationship. The ETP list includes not only the dates on which "Twist" was played, but also the songs played immediately prior to and immediately after "Twist." Jam Charts highlight specific performances of a song due to outstanding improvisation or notable features that distinguish it from a typical performance of the tune. Thus, the Jam Charts allow us to define "good" jams.

These data indicate that the song before "Twist" is no more likely to be a big jam than "Twist" itself.

But a closer look reveals a change starting in 2015. The following bar chart compares the proportion of Jam Chart entries for the 1997-2014 period relative to the period from 2015 through 2019. 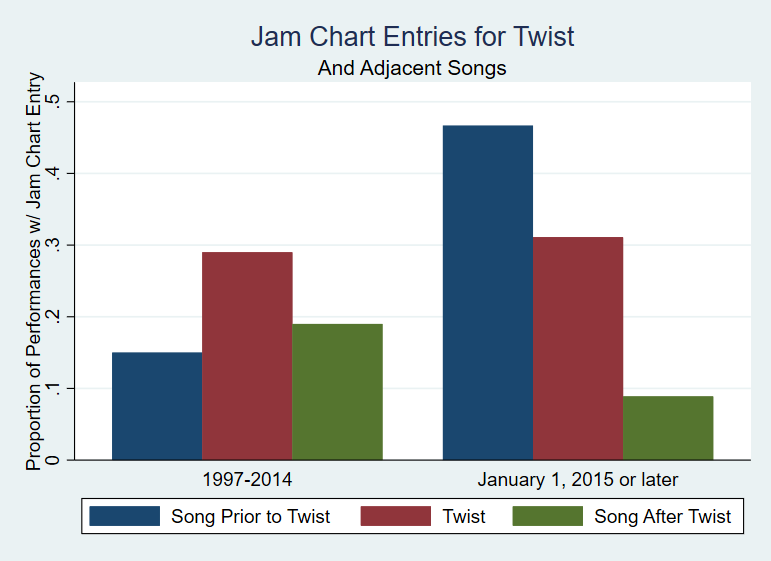 Even better, a big jam preceding "Twist" does not diminish its own strength, with 29% of "Twist" performances making the Jam Chart before 2015 versus 31% after 2015. However, one might wonder if the muscular, one-two punch of Something > "Twist" is relatively taxing for the band, as Jam Chart entries for songs following "Twist" have declined from 19% of performances to just under 9%.

None of this confirms "Twist" as a more likely landing spot than other tunes, so for future analysis I’ve been trying to identify comparable songs in the band’s repertoire—second set stalwarts that often follow big jams and have the potential to provide a big jam themselves. I have a few suspects in mind ("Carini," "Golden Age," "Piper," and "2001" among them), but if any reader has a suggestion, put it in the comments below or send me a PM.

This is the kind of analysis that I come here for! Love it! I was wondering the same thing about other post-big jam landing spots before I read your last paragraph. Keep this up! Good stuff!
Score: 10
2021-03-03 11:19 pm, comment by Dylman112

Thanks. I pulled data for this tune as well but I really wasn't sure about it. Between your and @Nesta 's comments, I'll make sure to look at it.
Score: 2