By all accounts, this shouldn’t be happening. Bands that have retained the same lineup for 33 years, various hiatuses included, simply shouldn’t be continuing to push their boundaries. This is the age when most bands that keep their lineup generally intact coast into their golden years atop a current of breakups, reunions, tepid albums, nostalgia-focused tours, and diminishing returns of creative energy. If you compare them to other long-running bands, Phish is now at the point when U2 released the little-loved No Line on the Horizon and when the Rolling Stones were five years past “steel wheelchair” jokes; they’ve now lasted longer as a quartet than the entire careers of R.E.M. and Sonic Youth. You can make the case that Radiohead, which also solidified its lineup in 1985 and remains vibrant, is Phish’s only peer. Don’t laugh.

Even long-running road warriors like the Grateful Dead and the Allman Brothers had mostly settled into their comfortable groove by the 33-year marks of their careers. In the 1990s, these two bands remained capable of transcendence on any given night, but by this point (at least according to my memory) most people went to their concerts for the overall experience, the excellent musicianship, and reliably good vibes—not necessarily to encounter the thrilling results of a band pushing itself in bold directions and finding new territory to explore.

So, suffice it to say that we’re in uncharted territory with Phish, and we almost didn’t get here. After spending much of 3.0 searching through their middle-aged musical identity through various peaks and valleys, they found a fresh vein of inspiration with the Baker’s Dozen in 2017. The challenge of stretching their entire catalogue across 13 shows, and the real risk of failure, forced them definitively coalesce the approaches they had been tinkering with, basing jams around texture as much as dexterity or groove, mining new pockets of their songs and musical instincts that contained potential for expansion, and rearranging their vocabulary to find new ways to communicate with each other and their audience.

Since those shows, they’ve found another peak in a career full of them, and they haven’t really come down from it—punctuating this fertile period with Kasvot Växt, their catchiest, most irreverent, and effortlessly joyful collection of new songs in 20 years. With these songs, for the first time in years they sounded like Phish, and in true form, they accomplished this by sounding nothing like Phish.

The 2018 edition of YEMSG found them returning to the site of the Baker’s Dozen to tie a bow on their best 18 month stretch in two decades. The opening show on the 28th found them shaking off a little rust, tinkering with set placement of the Kasvot songs, and delivering a satisfying if somewhat safe array of old and new favorites, and the band was poised to expand on this foundation in night two. After an always-welcome “Buried Alive” and a now-obligatory, type I, second-song “Blaze On” as aperitif, they officially kicked off the 29th with the Phish debut of the most Kasvot of Kasvot songs: “Turtle in the Clouds.”

Sounding more muscular with guitar and Fishman’s full kit, the song delivered on expectations. The overwhelmingly energetic (if sometimes too chatty) fans were prepared to cheer for the “house party” line; many might have less prepared to see the choreographed portion of the song performed. The band could not have been blamed for making the dance segment a one-night- only Halloween treat; instead, it was a crowd-pleasing moment that signaled that Trey was feeling frisky and the band was here to boogie.

After "Turtles," the set hit a crossroads. The band could have played a comedown song, gathered themselves, and settled into a comfortable jukebox set that closes with “Stash” or “Everything’s Right,” as they are occasionally wont to do. Instead, they played “The Sloth,” opting for the dark side and a show in which the devil draws near and the dogs of doom howl, eventually closing with Trey singing “death don’t hurt very long” over the “Tweezer Reprise” riff. After “The Sloth,” they played “46 Days,” which featured nice interplay between Page and Fishman before dissolving into the only prolonged ambient textures of the night; several minutes of quietly meditative melodies that blossomed into a booming singalong in “Cities,” one of the band’s more satisfying songs to segue into. Afterward, they cooled down Taj Mahal’s “Corrina,” played almost exactly two years after its last appearance, and seasoned heavily with some soulful organ playing by Page. That this would be the only ballad of the night speaks to the show’s quality.

The set closed with an extended dance party; first letting Leo continue to work the organ over the shuffling rhythms of “Ya Mar,” and then breaking into set finale “Wolfman’s Brother.” The jam portion of “Wolfman’s” began with a touch more scatting than usual, before shifting into an airy groove that found each band member laying syncopated rhythms atop each other. As the funk got deeper and more psychedelic, Kuroda made the lights run slow, elliptical laps around the arena, creating an effect unlike being on a Tilt-A-Whirl at the fair. This effect continued throughout a brief tease-out of “Party Time” and eventually back into the “Wolfman” scatting, to delirious results and a startling way to tie off a first set.

Set two began with 2018 MVP candidate “Carini.” A launchpad for many superb second sets this year, the band played the song with a vigor that suggested they couldn’t wait to get to the jam. And then once the jam kicked off in impressive fashion, Trey played as if he couldn’t wait to get out of it. What seemed in the moment like a ripcord into "Tweezer" that could suggest an impatient Trey, eager to dabble in bits of his catalogue to gauge audience reaction; the gesture instead proved the opposite. They slid into "Tweezer’s" jam portion with a series of start-stops that encouraged the dreaded “woos” (to be fair to those in attendance, the crowd seemed reluctant to “woo” but was encouraged to do so by Trey—don’t hate the players, hate the game). After Page hit reset on the increasingly ambient jam with a big synthesizer bwaaaaaa, the band began to build a more melodic crescendo back up, with Trey finding licks that built upon each other, with Page providing complementary flourishes and the rhythm section holding down a firm pocket.

After peaking the jam more than once, they brought it back to a shuffling funk that bled directly into “Death Don’t Hurt Very Long,” the funkiest Kasvot song. Now evident—if it wasn’t already—that the band was in the midst of one of those rarified evenings, they turned in a filthy rendition of the song that mostly served as a showcase for Fishman: not only he did he deliver spry backing vocals, but he also took spotlight for a couple of solo breakdowns, unusual for the solo-averse Bob Weaver and a joy to behold. Once Cactus got his turn with a sci-fi-sounding solo that didn’t stray far from the song’s foundation, the band brought the song around before deciding they weren’t done with “Tweezer.”

Starting from the “Tweezer” riff, they once more guided the song through spacey-territory and back into ever more peaks. The whole stretch was Phish at its finest, building on decades of experience manning the hose and melding together two songs written 28 years apart (one of them in its second-ever performance). It would even be fair to call this a 27-minute “Tweezer” with “Death Don’t Hurt Very Long” in the middle; this is how you ingrain new material into your repertoire.

With seemingly nowhere and everywhere to go from here, the band opted to bypass the ballads and oddball setlist decisions that have plagued some of the fourth quarters this year, and to instead go the full arena-rock route with a heavy, psychedelic rendition of “No Quarter.” They followed this with an ocean-deep rendering of “2001,” coming back after the first chorus for some interplay—particularly between Page and Trey—that could only be described as telepathic. It was a highlight in a show that had no lowlights. They topped the set off to tremendous effect with “First Tube,” piling peak atop peak with an exuberant Trey jumping around like a little kid playing rock star in front of his bedroom mirror.

They finished the show with an encore of “Shine a Light” and “Tweezer Reprise.” The latter was the necessary exclamation point to send the crowd into the Manhattan night, but the former—in what was likely the “Sleeping Monkey” slot—felt like a telling choice. On a night in which the band burned the World’s Most Famous Arena to the ground, the decision to cover Talking Heads, Led Zeppelin, and the Rolling Stones all in one night suggested to the crowd: “these bands are our historic peers.” In closing “First Tube” with Trey triumphantly holding his guitar skyward by the base, now 54 and having outlasted most of his childhood heroes as a bandleader, there could be no doubt about this.

Love the context of peers and “historic peers.” We really are the luckiest to still have our band throwing down the heat 33 years into their careeer.
Score: 17
2018-12-30 2:38 pm, comment by GOODTIMESBADTIMES 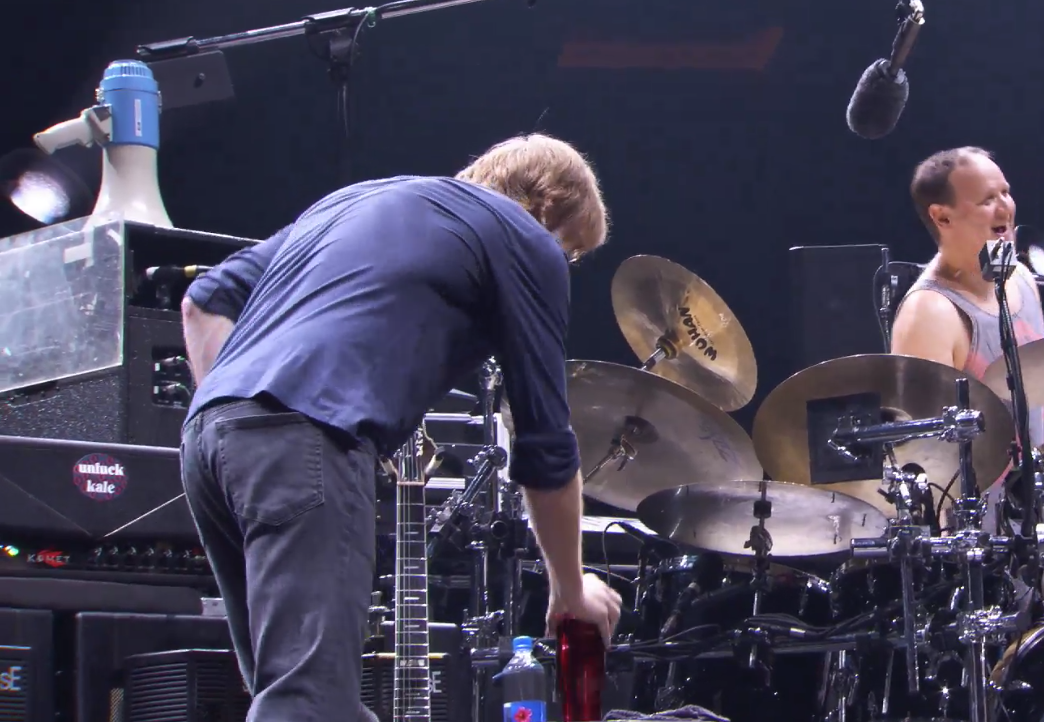 Not to necessarily nitpick (fantastic report, by the way) but isn’t it Mike who hits the synth that goes bwaaaaaa during Tweezer?
Score: 5
2018-12-30 4:04 pm, comment by ucpete

great show, great review....Sloth, first Tube, and 2001....havent seen Trey jump around like that in a while. "The overwhelmingly energetic (if sometimes too chatty)" MSG is a noisy room, I do sometimes wish the Bros would just shut up and listen
Score: 3
2018-12-30 10:23 pm, comment by Foreverjams

Excellent recap. My thoughts as well.
They are breaking into uncharted territory and unlocking new levels of play.
5 Star show ans perhaps the greatest non fest, non speciality show of all of 3.0.
Score: 1