Welcome to the 269th edition of Phish.Net's Mystery Jam Monday, the second and second-easiest of April. The winner will receive an MP3 download code courtesy of our friends at LivePhish.com / Nugs.Net. To win, be the first person to identify the songs and dates of both mystery clips – these clips are connected by a theme, but the theme needn't be part of the correct answer. Each person gets one guess – if no one guesses correctly, I will post a hint on Tuesday, after which each person gets one more guess before I reveal the correct answer on Wednesday around 10 AM PT / 1 PM ET. Good luck!

Answer: Congrats to @mickeyjoe86, who may or may not have gotten a little help from his friends this week in quickly winning this week's MJM, his third overall. For whatever reason, the three win mark seems to be the point where folks make their push towards MJM legendary status, or fizzle out and check in only infrequently – I'm guessing this isn't the last 'W' for @mickeyjoe86 though. After @PhreePhish flipped his cards over only to reveal the second-best hand, @mickeyjoe86 went all in on the Lakewood theme and correctly identified the 6/24/00 Tweezer and the 7/31/15 KDF, two of the finest jams from their respective years. Check them out, check out MJM270 on Monday, and keep your eyes peeled and nipples sliced for the final round of the MMJM tournament, beginning on April 25th.

At work all day and have night stuff so I can't confirm till after midnight anyway.
Sounds like maybe:
6/24/00 Tweezer
8/01/15 Tweezer

no actually I don't think the 6/24/00 tweezer is correct. theres a similar section but I dont think it matches.

[Crawls back to work from lunch just missing his 7th win]

Meh, this one was too easy for you anyway! The next three weeks, when the difficulty ramps up, you'll have way more time to get 'er done. After all, the whole raison d'être for the multi-clip MJMs is to get rid of the hit 'n' runs, which gives more folks a chance and time to solve – it totally obviates the first come, first serve MJM, and becomes more of a matter of putting in the time and your jam smarts than when you show up.

One thing that doesn't get talked about that a lot of folks (including myself when I was a player) really like is that regardless of convenience, it's nice to know that you can set an alarm clock to the MJM. Knowing that every Monday at the exact same time, no matter what, there'll be an MJM waiting for you, is something many folks look forward to. And running it on Monday gives people something fun to do on that sometimes brutal first day back at work each week. When the MJM became more sporadic, and you never knew if it was happening, or if it was, at what time, it drove me crazy. Eventually I stopped checking... so since taking over, my top priority has been consistency, hitting every Monday at the same time each week.

All that said, while I would never change the MJM date / time just because it worked better for one person, if enough people speak up wanting another day or another start time (from time-to-time), I'll absolutely accommodate that request. Though I would need to make sure players are aware of the change in advance, and I'd also need to talk with the site team about it, especially during busy (touring) season, to avoid conflict with other blog posts. The blog is generally way more active during tour – it's pretty funny how I've basically taken over the front page the past few weeks – MJM Madness indeed!
Score: 6
2017-04-10 3:29 pm, comment by ucpete

Picked the wrong day to tune in a bit late. 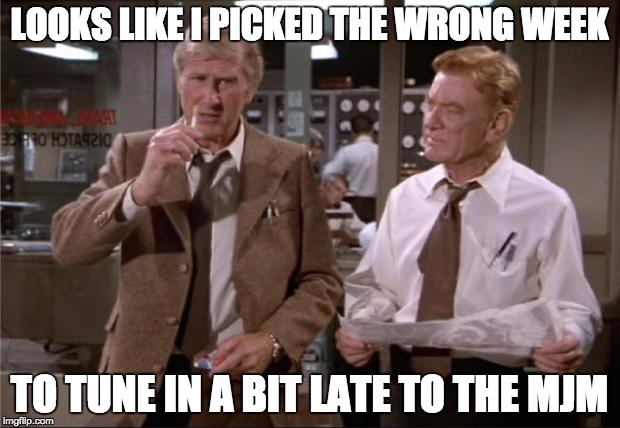 You're right @ucpete. I'm just sour after another near miss. So close!

I do get occasional Mondays off for holidays and stuff, but won't for a while.
As for the 'night stuff,' you're not far off!
My typical Monday is work 8-5, run to my 'before rehersal' bar (where i met my fiance. We try to keep that the same), then on to band rehearsal with our local community concert and jazz band, then the 'after rehearsal' bar with everyone and at home 10:30-11:30. Most of the time mjm is guessed by then. So Mondays off helps! Used to get them a lot. Not anymore.
But i won't let it get me down! Win #7 will be soon!
Score: 1