Summer in Saratoga: A Rock Art Exhibition, a poster show featuring Phish artists from around the country will be held on Saturday July 6th from 10:00 a.m. to 3:00 p.m. at The Saratoga Hilton in downtown Saratoga Springs, New York. Developed and produced by a group of artists and fans known as The Mothership Art Collective, this poster show will be held in the middle of a weekend of Phish, who play three nights at Saratoga Performing Arts Center, July 5th-7th.

Phish poster shows have been held over the years with great success, as unique posters made for the Phish shows that weekend and stop on the tour feature some of the best concert art being produced today. ‘Summer in Saratoga’ is the second event produced by The Mothership Art Collective, a group within the Phish community, comprised of artists and organizations who promote the art inspired by the band Phish. Their initial poster show, ‘First Tube’, was held in Atlantic City, New Jersey on June 16th, 2012 and was a success for all who participated in the event and raised $2000 to benefit The Mockingbird Foundation. The eclectic artists featured at this poster show displays the broad scope of Phish related art and capture the inspiration of the band in their art. The creative fan base that Phish has makes for amazing art inspired by the band, the locales and the music. The collective works hard to bring an art show to the Phish touring public each year.

In keeping with the great tradition and success of past poster shows, Summer in Saratoga will offer free entry to all patrons, tubes available for purchase, charitable donations from the event made to The Mockingbird Foundation and a wide array of artists with posters to fit any budget. Artists will be announced in early May, as well as any special edition works that will only be available at the show, which will be posted on www.mothershipartcollective.org in early June.

The Saratoga Hilton is located at 534 Broadway in Saratoga Springs, about three miles from Saratoga Performing Arts Center (SPAC). 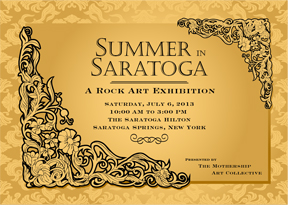