This show was a co-bill with The Joneses. Trey and Mike quoted Fuck Your Face and Minkin during the Melt the Guns intro. Have Mercy featured Jah Roy on vocals. Halley’s Comet featured Richard Wright on vocals. This show contained the first known version of David Bowie. 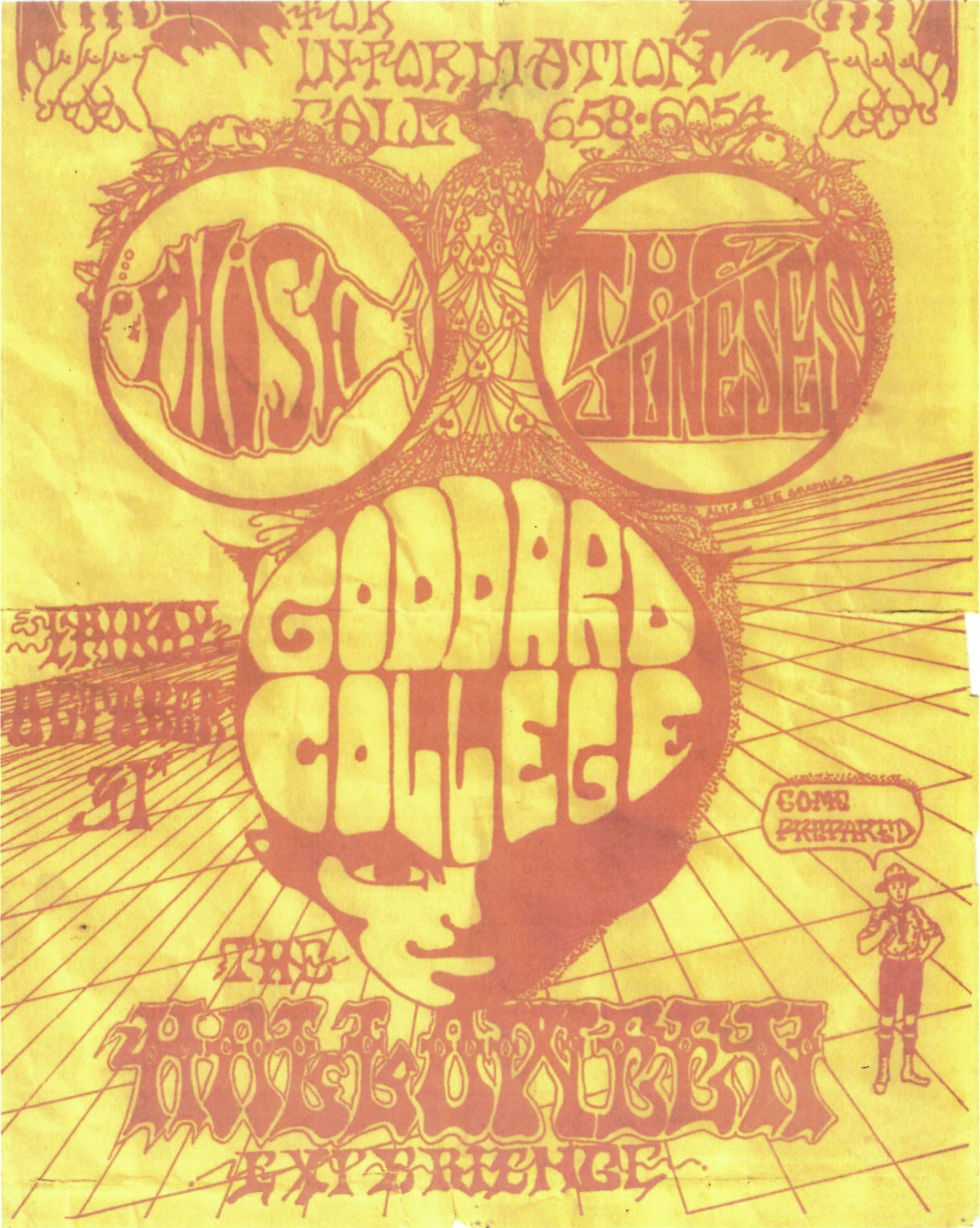 Two Sally's again in the first set. I'm so glad they kept Camel Walk. Melt the Guns is a great cover. They should bring it back in the modern era. Sorry, but Halley's is a little rough for me with Richard on vocals. Back Porch Boogie sounds like a precursor to Ok Kee Pa Ceremony. Nice full band Shaggy Dog and early stripped down Fluff.

There was an interesting jam going into a really fast AC/DC. Too fast. Swing Low is nice. Mike is a little off during parts of Peaches. Ah, the first known Bowie is a little slow at times, but already shows potential. Great Have Mercy jam tonight coupled with Hood again. Sanity is funny as usual, but no Row Jimmy lick yet. Skin it Back is another great early cover that they could bring back. We should all read Icculus. Alumni sounds strange with no Jimmy Page now that Jeff is gone.

Check this one out just for the first known Bowie and I'd have to say some of the jams here are as good as any modern show I've been to lately. Some things never change, and in this case, that's really good.

Continuing my tour through the early archives I come across their first recorded Halloween show. I half expected to see Elvis' Aloha From Hawaii covered in set 2 but alas, no dice.

Sound here is really warm and very clear. For the vintage and environs one could not expect a better tape.

As far as the songs, I'm limiting things to short blurbs and highlights:

Slave is wonderful with soaring guitar work. This thing is already a monster and it's only 86!

Melt the Guns is entirely forgettable, but segues into a solid Sneakin' Sally. I never realized how important this song was to the Phish canon until I started this foray into the early years.

Halley's Comet sounds like an intentional comic version. Doesn't do it for me.

Back Porch Boogie is a great little bluegrass number that they take out for a spin... nice! I wish that they'd play this one occasionally nowadays. This segues into Shaggy Dog, another tune that I'd absolutely love to see make the sporadic appearance in modern shows. Trey's chicken pickin' is outstanding.

The Fluffhead here is just beautiful... very light and airy. After an early appearance and subsequent absence, it's great to see Fluff becoming cemented into the lineup.

The jam sounds to me very much like it was lifted from Cumberland Blues. Really good and inspired, but more or less just a Trey (with a little Fishman) off the cuff, chicken pickin' fest. This segues to Bag using the same amp'ed up tempo from the jam, but it doesn't work well with the song.

Swing Low is great little interlude... they should use this more often. Lounge music.

David Bowie makes a debut at this show, sounding much like it always would. The jam is quite interesting and different than many more mature DB's in that it explores a lot of different musical nooks. Perhaps not the most cohesive, but certainly very intrepid.

Good Have Mercy jam, although the tempo is a little slow. This song is so powerful, I don't know why they didn't keep it in the lineup. I'd take this over Makisupa every time.

The Hood is solid, though nothing exceptional. I only mention it because at this point all of the components are in place for this song. It is done incubating.

I know that there are others who will vehemently disagree, but I really don't understand the appeal of Sanity or Icculus (or Anarchy, though we're lucky enough not to have one in this show). In my mind the band is way too good at this point to rely on comic response.

Skin It Back remains one of the strongest covers from this early era. This one should be played on a semi-regular basis in the modern era. Unfortunately, this particular outing is not one of the stronger attempts.

The first ever Halloween show sucked That is important to remember because it lead to The Beatles White Album The Who Quadrophenia Album The Velvet Underground Loaded Album the Talking Heads Remain in Light (which i personally dislike as a full album just saying i know that will get me crucified by Phans) David Bowie's Ziggy Stardust and the Spiders from Mars my personal favorite of all Phish covers on Halloween Then they played their own music Feugo but interestingly have yet to play YOU NEVER KNOW ever again after Halloween because they are ashamed of a true story where some Mexican Cousin stole all their money and I think that is funny because the LOVE OF MONEY is the ROOT OF ALL EVIL TODAY so they cant play it because they love money and rock and roll more than Jesus or him leaving Chicago and i love that something at least HUMBLES my favorite band after cocaine and opiates and alcohol and fame attempted to humble them. . .Then they did something really cool on Halloween they played the Thrilling Chilling Disney Haunted Castle album which was brilliant but then they did a few other albums that were really just Phish in the future as lies like Sci Fi Soldier and Kasvot a fake band from the future called Phish which is a stupid gag and gets old we want to hear other great albums from great bands of the PAST not fake shit from an unknown future Only Jesus is the Alpha and OMEGA meaning he is the beginning and END only Jesus leaving Chicago knows the end from the start of this crazy story called the Show of Life Only Jesus wrote Revelation and the book of Daniel only Jesus knows how this crazy human tale will end and Darwin was just another Lucifer liar along the way like Trey and so many other idiots who think they are wise and smart but are really just tools and cogs in the great Architect machine This first Halloween was terrible but it got better The LIGHT IS GROWING BRIGHTER NOW and the 10-31 costumes are getting sillier and better now
Score: 0
2021-04-21 1:59 pm, attached to 1986-10-31

I prefer the show before this one (10/15/1986), but this first Halloween show is not too shabby. First known version of Bowie, first recorded version of Melt The Guns. There are definitely moments that make the listening worthwhile. Here are my highlights:

2) Melt The Guns: Love the original, and this cover tune seems perfect for Phish's vibe. Unfortunately it didn't stay in the repetoire. However, it does fluidly 'melt' into one of Phish's most beloved cover tunes…

3) Sneakin' Sally: When has this song not been a smoke show? It seems like all these early versions rock. Trey's lead is confident, and the whole band is a little groove maker

4) Jam > AC/DC Bag: The jam the precedes the bag is kind of simple. Trey noodling over Fishman. However, the build-up immediately preceding the transition to Bag is pretty hot and the ensuing Bag is also very hot. I think the jam was the engine revving up to unleash.

5) Bowie: First known Bowie, the arrangement is pretty much the same we've come to know over the years, although there is one notable difference with a tempo shift and slightly different melody. Kinda neat. As far as the jam goes, freaking smokes! Honestly, it makes me happy that from day 1, Bowie has been a juggernaut.

What a packed show. The birthplace of David Bowie. The sound of the place isn't great, you can hear a lot of people talking. While the set list seems great like, Fluffhead closing the first set, it was pretty mild it was not the amazing rocking jam show it would be with later Phish. I don't care for this Halley's Comet, early, short, and sang by Richard Wright.

Highlights from this show include:
Camel Walk

Skin it Back > Icculus