SET 1: A Song I Heard the Ocean Sing, AC/DC Bag > Back on the Train, Blaze On, Sugar Shack, Things People Do, Birds of a Feather, Mercury, Let's Go, Alaska, More

SET 2: Down with Disease[1] > Carini > Winterqueen, Ghost > Possum, Slave to the Traffic Light

Trey teased Sneakin' Sally and No Men In No Man's Land in Back on the Train. DWD contained I Dream Of Jeannie theme, Shine, and Manteca teases, featured Trey on Marimba Lumina, and was unfinished. Trey teased Cat Scratch Fever in Ghost and Streets of Cairo in Possum. 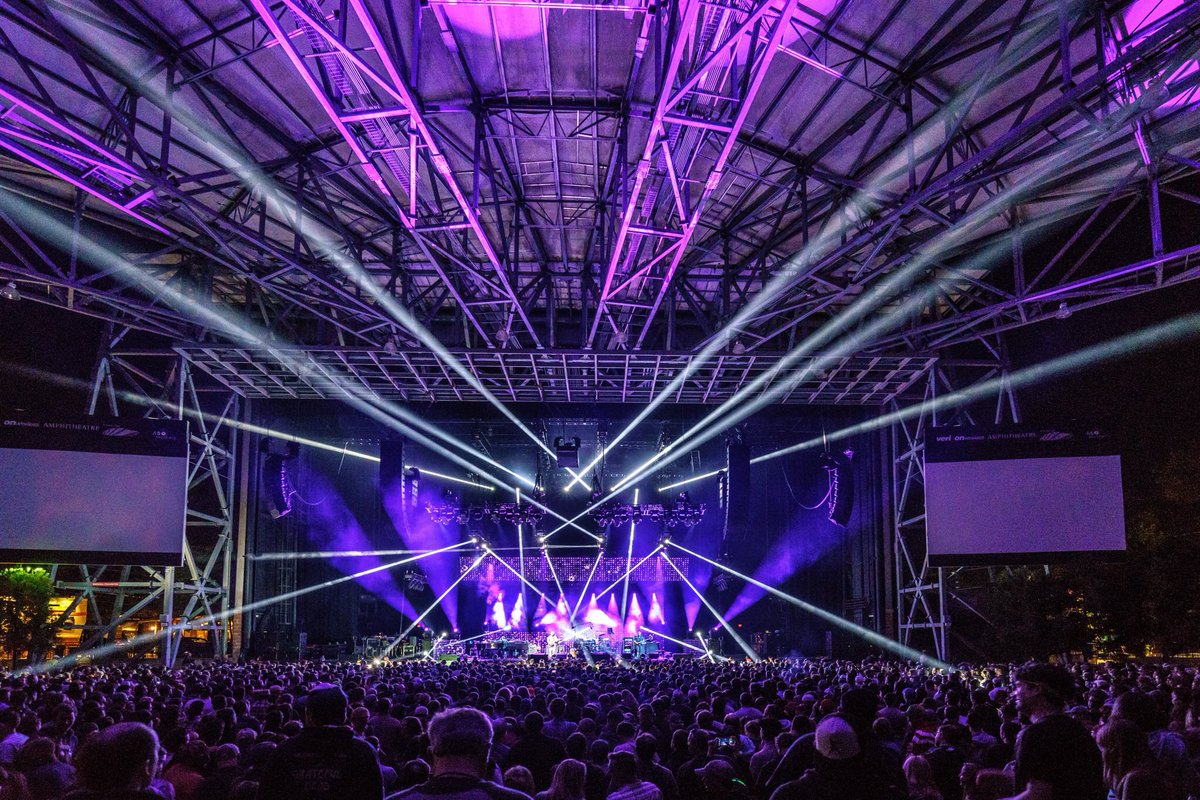 Show Rating
Overall: 4.307/5 (362 ratings)
Jam Chart Versions
Back on the Train, Down with Disease, Winterqueen
Teases
Manteca, Theme from I Dream of Jeannie, and Shine teases in Down with Disease, Streets of Cairo tease in Possum, Cat Scratch Fever tease in Ghost, Sneakin' Sally through the Alley and No Men In No Man's Land teases in Back on the Train
Debut Years (Average: 2002)
Song Distribution

Rarely do I feel compelled to review a show; however, last night's seamless, 6-song second set, anchored by one of the best DWD's of the modern era and an ethereally beautiful Ghost, deserves special mention, particularly as a counterpoint to the bitching about summer tour's lack of flow in second frames. Carini melting into Winterqueen, an energetic Possum, and a raging Loving Cup were also highlights in their own right. Last night's second set is why we keep coming back. Until tonight!
Score: 13
2016-10-22 3:01 pm, attached to 2016-10-21

Just one of those special nights . 4.5 stars for me but I round up to 5 but that's just me.

That was some 1990's Trey on guitar tonight. I feel Fall tour has been led by Gordo mostly so it was very nice to see Trey step up and take this one by the horn(s)

2nd set? If a 20 minute non stop rage fest is your thing then listen to that disease. Ghost had IT , rest of the set was amazing too, everything was on point

Fishman sounds really pumped on this ASIHTOS 1st-set opener. Tasty fills galore! I don't usually concern myself with this kind of thing, but sometimes it boggles the mind how little mainstream-critical adulation Phish gets, particularly with regards to their individual and collective instrumental virtuosities. "The boys" sound connected/in synch to start with, with Mike asserting himself basically to the point of steering the jam, so this bodes well for the rest of the show. I think the last time I can remember an Oh Kee Pa Ceremony > AC/DC Bag was Lake Tahoe from 2011, 8/8/11 or 8/9/11 IIRC, but this standalone Bag is tight out of the gate. I love Mike's delivery of the "Let 'em fight it out" line, perhaps a piddling thing to zero in on, but it shows that Phish can switch things up nightly, even in a 6m17s version of Bag like this one. Trey sounds like he's having a lot of fun, and his guitar playing is inventive here, if not incendiary. I'm viewing Page's contributions through the lens of the new Rolling Stone article, with its assertion that Page has a hard time leaving his home behind to go on the road, but in my mind, he's always been truly vital to the band, and if the four of them--along with crew members and everyone whose work goes into making this spectacle for us--have to compromise in order for us to continue getting to go Phishing, I'm okay with that. Particularly illuminating in that article was the context placed behind the lyrics for Home. Honest Phish means healthy Phish. Nice, swift little transition into BOTT. I think I remember asking a friend--right before my first show, which was a month or so after the release of Farmhouse--which song from the album he most wanted to hear, and his answer was "Piper," though mine was "Back on the Train." I'm about the least vetted 1.0 phan there can be, I guess, though that's not to disparage BOTT, this performance of which sees some post-Fare-Thee-Well leads from Trey in accompaniment with Page's driving clavinet licks. Call me crazy, but I can hear the practice behind Petrichor starting to inform Trey's "soloing" at this point in Fall Tour: see around 4:15 in miniature for some classical-influenced Trey lead-playing. I think that could be just the thing to open up his playing and possibly reinvigorate the other three band-members, as well. I worry sometimes that Trey spreads himself a bit too thin, but then something magical always happens to make me eat that question. Some really tasty bends circa 6:30 of this BOTT from Trey! The drop back into the closing chords feels natural, though I'd've been perfectly happy to get a long, wending Type-II excursion, of which for BOTT there've been too few, IMO! I definitely prefer the live Things People Do over the studio demo. "One, two, motherfucker" to count in BOAF? Sure, why not, LOL! Kind of a '99 feel to the first set up until Mercury, to my ears, though I recognize that's an highly unorthodox opinion when the vast majority of the set is 3.0 material. Trill(y) revved-up More to close, and it's time for a message from our sponsor.

Key change around 11:00 into the Down with Disease 2nd-set opener is where we enter Type II territory proper, and this is really a throwdown (it had already been broughten, too!) Some angular type of riffs from Trey eventually give way to some time spent with the Marimba Lumina, and then it's time for Carini. This Carini is kind of like a yin/yang symbol: dark to start (though not negative or necessarily feminine) and then bright (though also positive and I suppose masculine, LOL) and is quite a journey. Winterqueen is interspersed as what I would consider a breather, but it also takes on special personal resonance following the previous thirty minutes' music. Ghost reminds me somewhat of the 8/17/97 Went Gin, in that it builds on single-minded purpose to a raucous peak. Funny voiceover from Fishman in the closing moments before a > into Possum. Slave is masterfully poignant as always, and we get a Loving Cup encore. 4-star show, in this reviewer's opinion!

I don't have much time to review, as I'd really like to get some sleep after last night (currently Noon, and I still haven't slept since 8AM yesterday (Irish, so there's a 6 hour time gap) ), so I'll keep this brief.

1. Set I was nice, Mercury is still great to hear as ever.

2. HOLY CRAP THAT DWD WAS GODDAMN FANTASTIC, 20 STRAIGHT MINUTES OF FIRE, EVEN WHEN TREY HOPS ON THE MARIMBA LUMINA, IT'S AWESOME WOW. The rest of Set 2 is pretty great as well

First set wasn't the best song selection after back on the train but everything was played well so I can't complain.

Second set opened with the best DWD I've heard since the Miami Disease (1/3/15). Carini was perfectly placed as both the band and the crowd erupted with energy. The jam in Carini shifted to a blissful tone. Although the jam didn't necessarily "peak," it was great for the moment and Winterqueen fit the set very well to this point. Ghost was a welcome surprise and the jam was fantastic with a triumphant peak. A ferocious Possum kept the energy sky high and a beautiful Slave to the Traffic Light capped an outstanding second set. These are the kind of shows that keep me coming back. Especially when they top shows like this the following night!
Score: 1
2016-10-22 5:48 pm, attached to 2016-10-21

This was a very solid show, and really fun to watch from the couch. It felt like the band was having fun and Trey was on another planet. It feels like he has found himself again recently. Not sure if it is the relief of finally releasing the album or all of the practice to get the new songs ready for the tour, but he and the band seem like they are on a high right now. At one point, I think it was during Possum, I turned to my wife and said "wow, that just sounded like 1997..."

The DWD jam was great, but felt a bit directionless and kind of came apart during the Marimba solo, but the flow in and out of songs in the second set felt really nice, and the ability of the band to maintain a high level of energy was present throughout the show.

I live for these 4-6 song second sets. The DWD is an absolute Gem and a must must hear. This is the best DWD ive heard in a long time. Think Reading DWD 2013. Carini was beginning to get legs but then broke off into winterqueen which I wasn't all that ecstatic about until the jam out o winterqueen picked up right where the Carini jam left off imo. Great stuff. Really this whole second set is a must listen. But DwD and Ghost take mvp honors with DWD definitely being highlight of evening. Been waiting all summer for second set like we got last night. Hopefully next time we could cut the 2nd set down to 5 songs